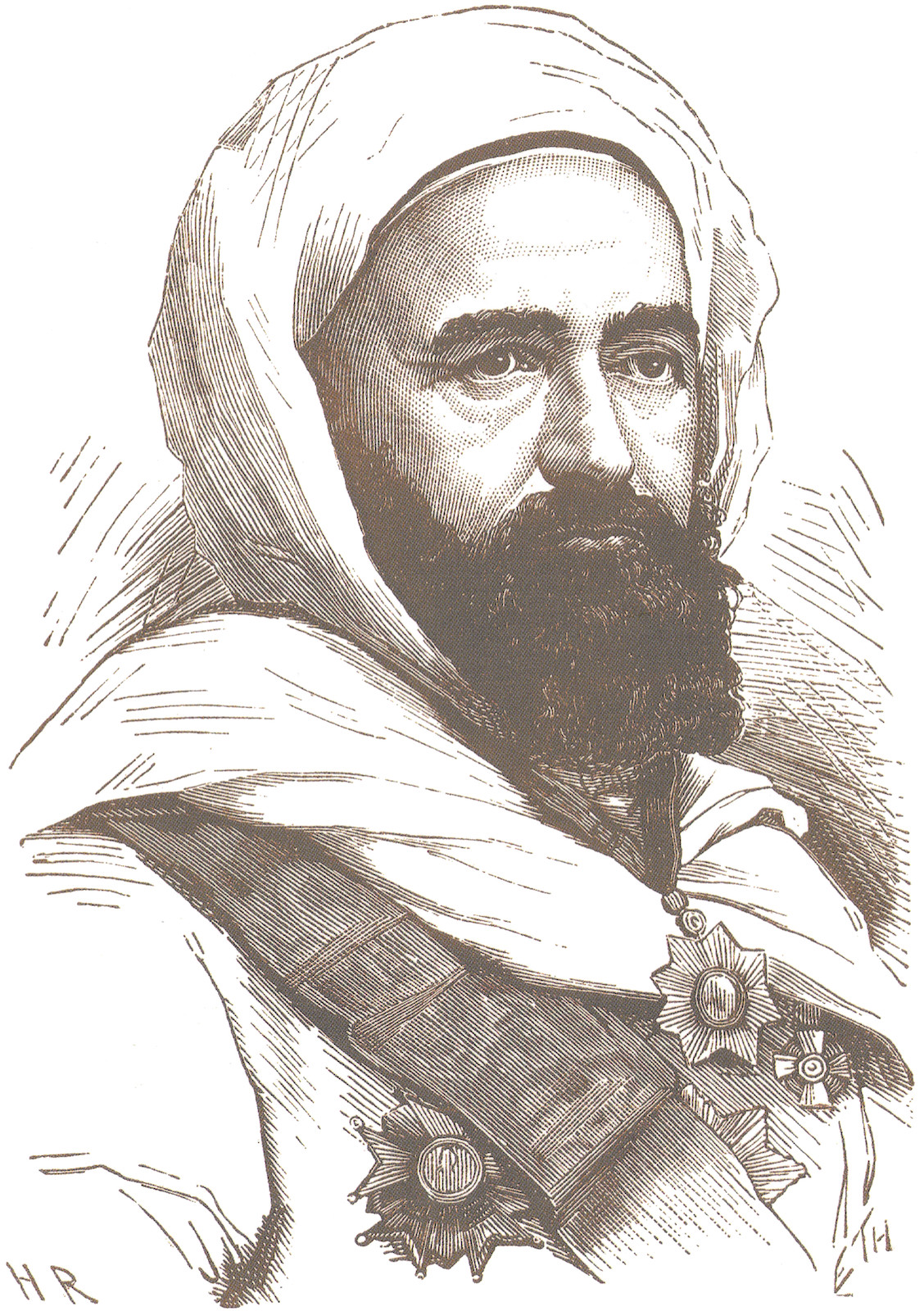 By John Kiser
Author of Commander of the Faithful: The Life and Times of Emir Abd el-Kader

The Emir Abdelkader ibn Muhieddine, namesake of the Abdelkader Education Project, was an Islamic scholar from Algeria who resisted French colonialism in the mid-19th century. His faith-based leadership, moral authority, keen intelligence, physical stamina, natural military prowess and knowledge of tribal ways enabled him to organize Algerian tribesmen into a guerrilla force that effectively resisted the French occupation. In order to avoid further suffering the Emir negotiated a truce with the French in 1847 after fifteen years of fighting one of the most advanced armies in the world at that time.

The Emir’s commitment to human rights earned him global admiration from the likes of President Buchanan, Queen Victoria, Pope Pius IX, Tsar Alexander II, and the presidents of France, Greece and Turkey. Newspaper accounts of his valor and chivalry won him admiration as far as the American Midwest, where a new settlement was named in his honor; today, Elkader in Clayton County, Iowa.

The Emir’s path to worldwide fame began with a bungled French occupation of Algiers in 1830.

The occupation spawned a resistance movement from which Emir Abdelkader emerged as France’s most tenacious opposition leader. His strength was rooted in his faith, moral authority, keen intelligence, physical stamina, natural military prowess, and knowledge of tribal ways. His most effective weapons were his diplomatic astuteness, desert-hardened horses,  and his Jewish intelligence network that kept him informed of the political divisions in France caused by its colonial adventure. He earned the respect of French generals and the gratitude of his French prisoners for the humane treatment he insisted they receive.

French scorched earth tactics and desire to dominate all of Algeria led to widespread defections among Abdelkader’s tribal allies. After fifteen years of struggle and wanting to avoid further suffering of his people, the Emir surrendered voluntarily in 1847, believing it God’s will. In exchange, he negotiated free passage for his family and followers to the Middle East. Following the fall of the French monarchy two months later, the new republican France disavowed the agreement. The Emir and his extended family were held captive in France for five years. Over twenty-five members of his entourage died of pneumonia, cholera and depression brought on by the damp cold of the abandon chataeus that became their prisons. Angry and shamed for having trusted France’s word, Abdelkader resisted bribes of the Ministry of War to remain in France, insisting that the government honor its promise. The Emir publicly endured the injustice with a grace, piety and dignified stoicism that won over many French and European notables. Among his many admirers was his future biographer, Col. Charles Henry Churchill. Giving in to pressures from both within and outside of France, the newly elected President Louis-Napoleon Bonaparte granted the Emirs freedom in 1852. 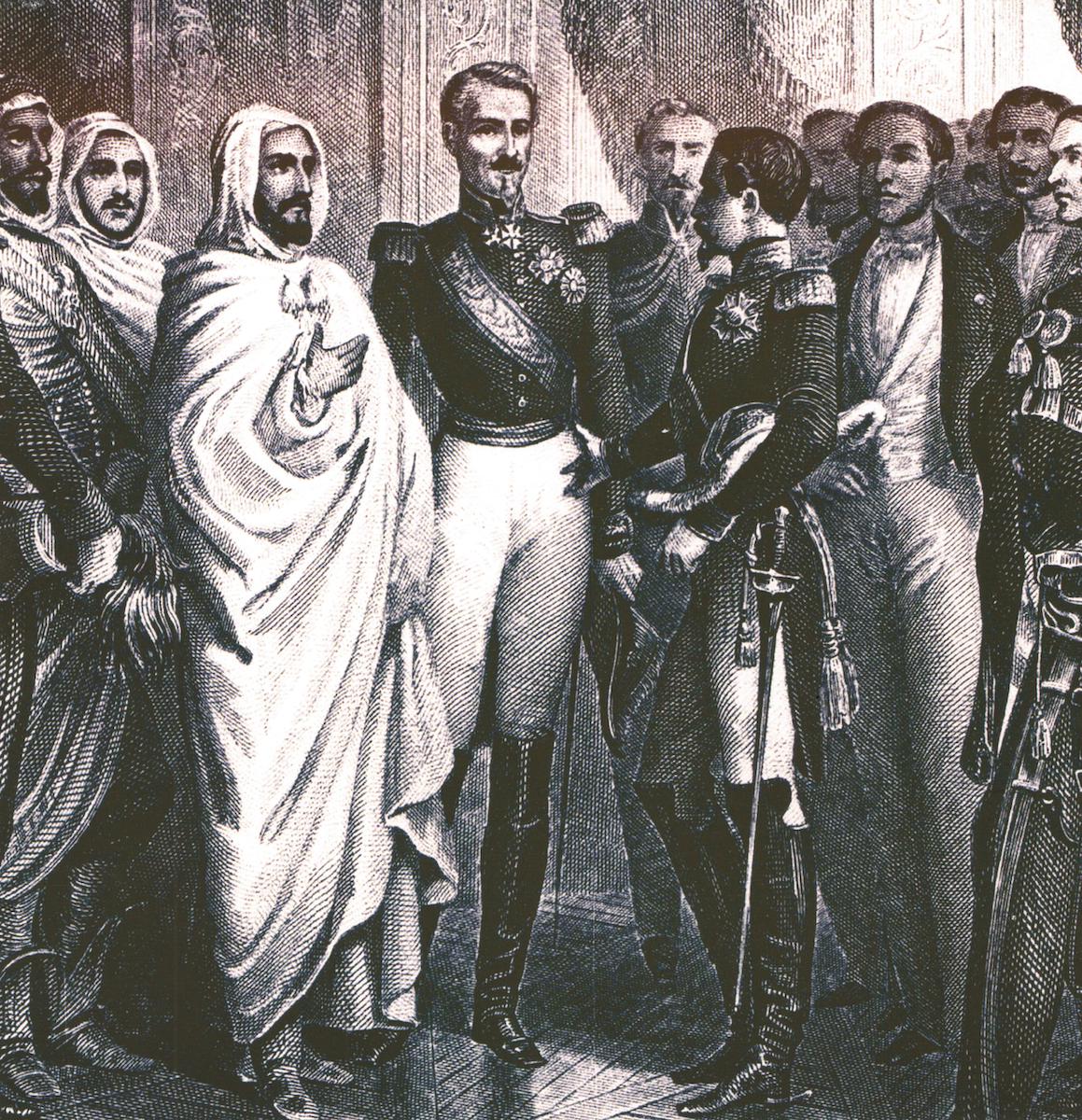 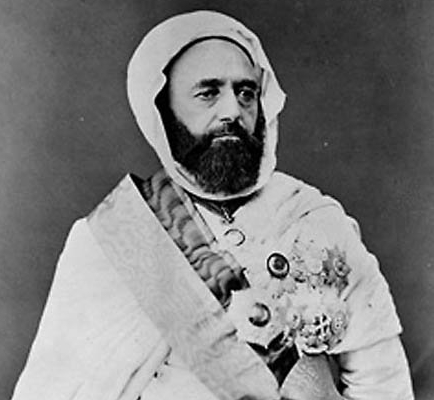 The Emir lived out his days in Damascus, teaching, studying and engaging within its diverse intellectual community.

When anti-Christian riots broke out in Damascus in 1860, the Emir took thousands of Christians under his protection, including French, American and Russian diplomats. When the rioters clamored at his door, the Emir brandished his sword, while invoking Islamic law regarding the protection of innocents.

His moral courage earned him global acclaim from the likes of President Buchanan, Queen Victoria, Pope Pius IX, and Tsar Alexander II. The Emir later wrote, “What I did was merely obedience to our sacred law and to the precepts of humanity… When we think about how rare are the real champions of truth, and when one sees ignorant people who imagine Islamism is about severity, hardness, excess and barbarism, it is time to repeat these words: ‘Patience is godliness, trust in God.’”

In 1873, based on faulty information, The New York Times prematurely eulogied the Emir: “The nobility of his character, no less than the brilliancy of his exploits in the field, long ago won for him the admiration of the world… Abd-el-kader deserves to be ranked among the foremost of the few great men of the century.” The Emir died on May 26, 1883. His remains were repatriated to Algeria in 1966.

Why is Emir Abdelkader Important?

Abdelkader’s practice of Islam was informed by deep study and devotion to religious law, as well as by his broad education that included math, astronomy, geography, history and Greek philosophy. Abdelkader’s legacy as a reconciler offers an example of religious and moral courage, integrity, intellect, and compassion. During the French-Algerian War (1830-1847), his treatment of French prisoners is credited as the forerunner of the Geneva Convention on Human Rights. As a prisoner in France (1848-1852), he was so admired that his name was placed on the ballot for French president. In exile (1853-1883), Abdelkader saved thousands of Christian lives in Damascus. In 1873, The New York Times prematurely eulogized the Emir:”… Abdelkader deserves to be ranked among the foremost of the few great men of the century.” In the words of Prince Hassan Bin Talal of Jordan (2009), “Abdelkader’s jihad provides Muslims with a much needed antidote to the toxic false jihads of today dominated by anger, violence and politics.”